JEFFREY COMBS as Edgar A. Poe - Extended Through October 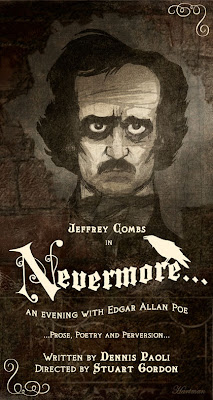 The production pleasantly astounded me. "Nevermore . . . An Evening With Edgar Allan Poe," playing at the Steve Allan Theater in East Hollywood, presents the most authentic portrayal of Poe I've ever seen. Blessed be for the re-teaming of actor Jeffrey Combs, director Stuart Gordon and writer Dennis Paoli. The team that brought us the Lovecraft and Poe movies reunites to show us Poe the intellectual, the wit, the satirist, the literateur, the magazinist, the lost son, the devoted husband, the devoted nephew, the neglected genius, and most of all, the drunkard. This is Poe as he suffered. If you want to see the true soul of Poe, go see Jeffrey Comb's portrayal of Poe. See how Poe's sensitive soul struggled to endure the tortures of living.

"Celebrate the bicentennial of Edgar Allan Poe's birth with the star of Re-Animator, From Beyond, and Star Trek: Deep Space Nine & Enterprise. Set in 1848, Nevermore is loosely based on real events and follows Poe on a cross-country speaking tour fraught with strange occurrences that signal Poe's descent into madness."

Steve Allen Theater.com Production of NEVERMORE
mailto:info@steveallentheater.com
Posted by Brian Aldrich at 12:30 AM No comments: 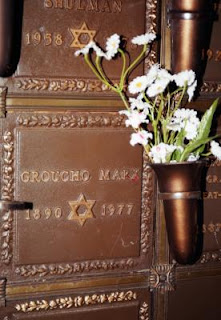 Eden Memorial Park is a beautiful hillside cemetery with a fantastic view of the San Fernando Valley. My wife's grandparents rest there under shady trees absorbing whatever breezes the valley affords. My two favorite comedians are buried at Eden. GROUCHO MARX's ashes sit in a small crypt inside a mausoleum. LENNY BRUCE's body decays under the ground in a hillside plot. I hope this turns out to be a false accusation. Eden looks like a first class place to spend eternity...if you like the valley. 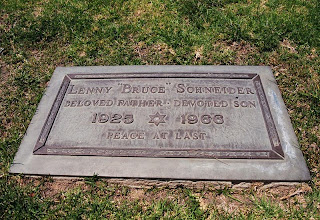 Eden Memorial Park isn’t L.A.‘s biggest Jewish cemetery, but it’s up there. And this week it was dragged into Los Angeles County Superior Court, accused of desecrating the final resting places of 500 Jews:

Attorney Michael Avenatti, who filed the suit, told CNN that his investigation revealed that as many as 500 graves may have been torn up without the families’ permission.

“We allege that Eden Memorial Park and its management for the better part of 15 years were engaging in improper burial practices, including the desecration of graves and the improper disposal of human remains,” he said.

The lawsuit is filed by F. Charles Sands, whose parents are buried at Eden Memorial Park, against the cemetery and its owner, Service Corporation International, based in Houston, Texas. The company is the largest owner of cemeteries and funeral homes in the United States.

This is not the first time Service Corporation International has faced allegations of digging up graves and moving bodies to make room for new remains. It reached a $100 million settlement with families of people whose remains were desecrated at Menorah Gardens in Florida. The company also reached a $14 million settlement with the Florida state attorney’s office over issues related to those claims.

The CNN report goes on to mention that Groucho Marx and Lenny Bruce are buried at Eden, but somehow offers no perspective on Jewish burial customs. It closes with a quote from the lawsuit that states “the deceased are typically required to be interred within 24 hours, thereby leaving little time to obtain consent to move an encroaching vault in an adjacent plot and giving defendants a motive to desecrate human remains and commit other immoral acts rather than comply with the law.”

Suffice to say, disturbing the dead is not kosher. Baruch dayan emet.

Posted by Brad A. Greenberg at Jewish Journal.com

FROM THE YOU TUBE PAGE:

Eden Memorial Park is a welcoming sanctuary situated in lovely Mission Hills, California, where it has proudly served the Jewish community throughout the area since 1954. This lushly landscaped cemetery, owned by the Dignity Memorial Network, offers a dedicated, professional staff to help during the planning of a funeral in the Jewish tradition.

With acres and acres of lovely terraced grounds and gardens, the cemetery is located in the heart of the San Fernando Valley of California, in close proximity to both I-5 and I-405 near Los Angeles.

The beautiful city of Mission Hills surrounds the cemetery, rich in the history of California, and is home to the picturesque Mission San Fernando Rey de Espana.

Mission Hills is also the location of the Andres Pico Adobe, which is known to be the second oldest residence in California. The history of Eden Memorial includes being the final resting place of the world renowned entertainers Groucho Marx and Lenny Bruce.

Just a short distance from Los Angeles and the majestic Pacific Ocean, Eden Memorial Park is a secluded, meticulously landscaped cemetery with a caring staff available to assist families and friends in the time-honored traditions and rituals of Jewish funeral practices.

Known for its excellent reputation and relationships with numerous Jewish organizations and synagogues in the Los Angeles area, Eden Memorial Park insures the long-term care and keeping of the cemetery in perpetuity and promises the highest standards of service for all who enter its gates.

Eden Memorial Park's You Tube Video is brought to you by

buyandsellcemeteryplots.com
Posted by Brian Aldrich at 12:27 AM No comments:

Did the Murderer Read Poe?

The media can keep looking for the next runaway bride. Yale graduate student Annie Marie Le, 24, would have been married to fiancé Jonathan Widawsky this past Sunday, September 13th, on Long Island. But she went missing on Tuesday, September 8th. She left her purse, money, credit cards, and her cell phone in her lab. A surveillance video recorded her entering the four-story lab building at 10 Amistad Street in New Haven. This was the last time she was seen alive.

In addition to beginning the missing persons investigation, the Yale Police handed out flyers with Le’s picture, hoping for more information. The FBI took over and took a K-9 team into the building. On Sunday, the day of her wedding, human remains were found stuffed inside a wall in the basement. Lab animals are housed in this section of the building, a Yale University laboratory with several levels of security card access. Elsewhere in the same building, investigators found bloody clothes hidden above tiles in a drop ceiling.

Monday’s autopsy positively identified the human remains as Annie Le’s. The cause of death is still pending further autopsy. Her death has been ruled a homicide. Police have questioned people, but no one is a suspect and no arrests have been made.

This crime begs the question: “Did the murderer read Poe?” Was it Montresor’s entombment of Fortunato in the wine cellar wall that inspired this killer to copycat this method of corpse disposal? Or was it the deranged mad man who killed his elderly roommate and hid the body under the floorboards that inspired this criminal to hide his dastardly deed in the basement walls of the laboratory building? Or both?

Of course, I’m referencing the two Poe tales: THE CASK OF AMONTILLADO and THE TELL TALE HEART. When they catch Annie Le’s killer, I hope they ask him if Poe provided any inspiration?

Posted by Brian Aldrich at 11:50 PM No comments: