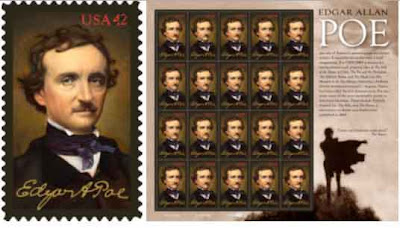 RICHMOND, VA — The father of the “mystery novel,” and one of America’s most extraordinary poets and fiction writers was immortalized on postage today when the U.S. Postal Service celebrated the 200th anniversary of the birth of Edgar Allan Poe. The stamp honoring Poe was dedicated at the Library of Virginia in Richmond where several dignitaries — including Poe’s distant cousin — spoke of his accomplishments. The 42-cent First-Class commemorative stamp is available nationwide today.

“It is ironic that a man who faced loneliness, poverty and despair throughout much of his life, should be so richly loved by so many so long after his death,” said U.S. Postal Service Board of Governors member Katherine C. Tobin in dedicating the stamp. “He invented the detective story and elevated literary criticism to an art form. Poetry, however, was his self-declared passion. His works are found, or referenced in seemingly every form of art — in plays, movies, musicals, operas, symphonies, recordings, comics, cartoons, television, sculpture, paintings and more. From Alfred Hitchcock to Bart Simpson to The Beatles — who placed Poe center stage on the cover of their Sgt. Pepper album — the legendary writer, poet and literary critic has captured the public imagination as few, if any, have ever done.”

Posted by Brian Aldrich at 8:26 PM No comments:

Posted by Brian Aldrich at 12:01 AM No comments: